AWS Fargate Platform Version 1.4.0 introduces some new AWS Fargate capabilities and this entry describes some of them.

Dating back in 2018, conversation on this github roadmap issue started. Almost all of the developers that added comments wanted the feature to be added onto the Fargate system for the obvious reason that is to have persistent storage in the duration of their Fargate tasks intermittent execution.

Last week, AWS announced that the said feature is now generally supported. From their blog post, it is stated that ECS task definitions for both EC2 and Fargate now support the new EFSVolumeConfiguration parameter which leads to:

To test this new feature, this Qiita blog entry was generally followed as it suggests an easier and a quicker way to explore the said new feature. General flow is as follows:

Create an ECS Cluster. Use the default VPC, Subnet(s), and Security Group for simplicity. You may also use the default ecsTaskRoleExecution IAM role.

Create an EFS File System. Create a volume and take note of the File System ID. Take note that this needs to be in the same Availability zone, VPC, and subnet of your choosing. You may leave the EFS IAM authorization section, again, for simplicity.

Configure Task Definition. You may use the default values. In the Volumes section, add your newly created EFS. 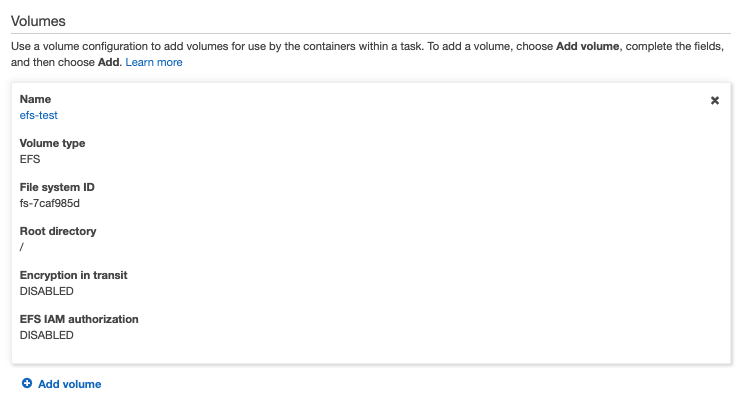 Prior to mounting the EFS volume and re-configuring container definition, a simple HTTPD application was run on platform version 1.3.0: 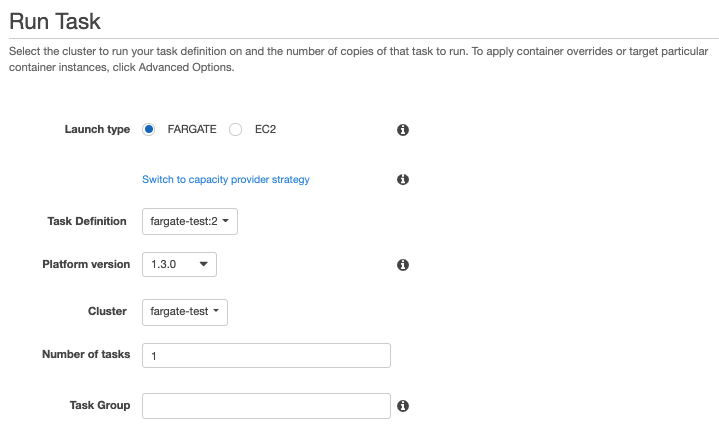 df -hT /usr/local/apache2/htdocs/ was also executed to verify if the EFS is already mounted.

No EFS is seen mounted.

Now, if you create a new revision of the same task definition, explicitly run it on platform version 1.4.0. You should get the updated HTTPD web app: 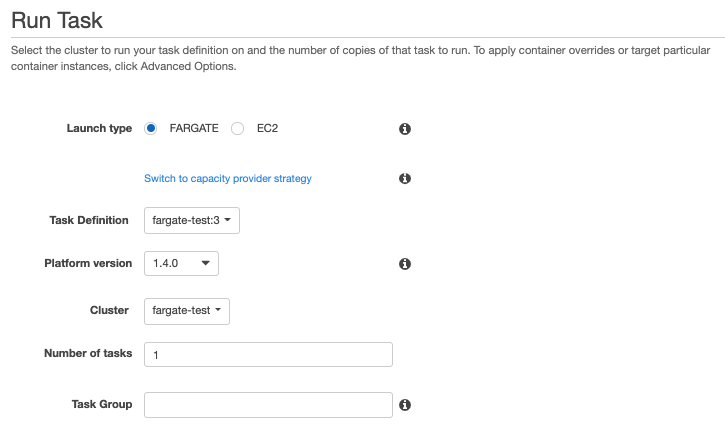 It is as simple as it can get. The gist is that you should have an EFS prior to configuring your Task and Container definitions. Only then will you be able to mount your persistent storage.

Some interesting use cases may include installing a SQL client, shared storage across different Fargate tasks, and leveraging EFS hierarchy for some applications like PHP, Jenkins, etc.

Currently CloudFormation support is on the way.

As the title suggests, Fargate now has a bigger on-the-fly storage.

This was simply tested. The idea is run df -bg command in the container in both platform versions 1.3.0 and 1.4.0. 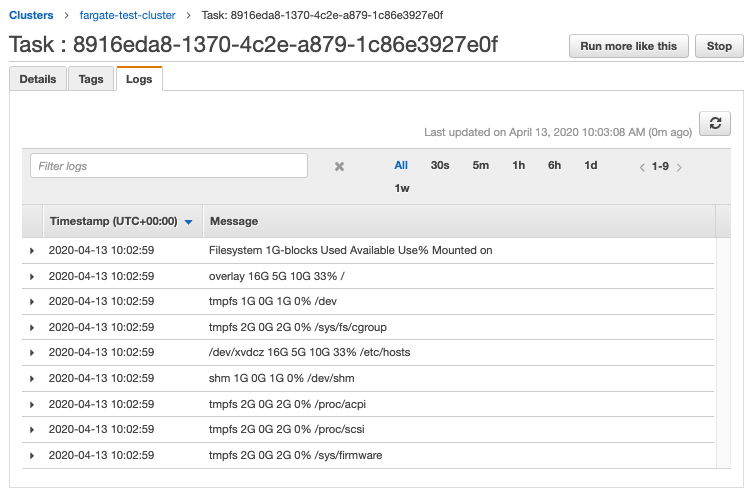 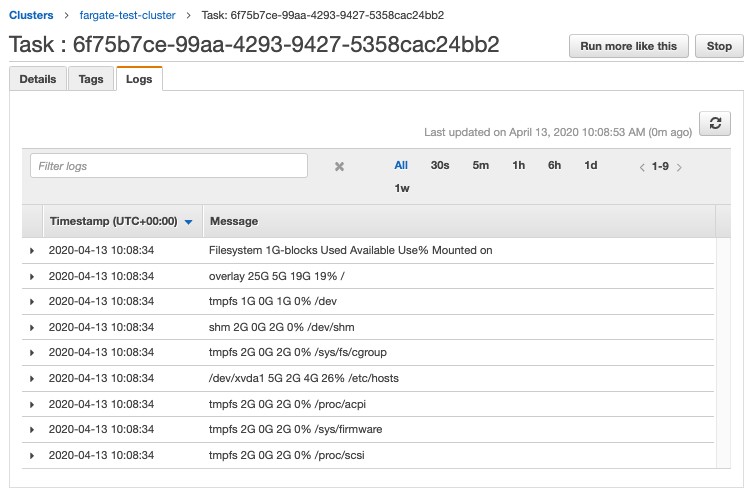 Notice the difference in values provided by running the df command.

This enables the customers to run slightly larger data in their Fargate tasks.

This is merely a fix for the pre-existing bug in AWS. From their blog, Up until platform version 1.3.0, Fargate tasks could not report network performance metrics back to Container Insights due to a limitation that exists at the intersection of the awsvpc networking mode and the ECS agent.

Notice the Network section which AWS reported to be unresponsive before now receiving data without a problem.

AWS previously decided to disable Linux capabilities. Since receiving feedback from customers as well as AWS partners, they have decided to add the CAP_SYS_PTRACE capability in Fargate task.

Containerd is replacing Docker as the container runtime

From AWS, this will allow Fargate to innovate faster. Docker engine builds on top of Containerd. This means that Docker containers may still run without a problem. This is not a customer consumable feature and is handled by AWS internally. You may read more on this blog post.

The Fargate agent is replacing the ECS Agent

Fargate agent, as the name suggests, is purpose-built for the Fargate environment and will allow AWS to innovate faster for the customers. Combination of it with Containerd will propel the new Firecracker-based architecture.

Now, due to the changes in container runtime and the agent running the VM, it follows that there is a need for a change of the relevant error messages. For example, DockerTimeoutError does not make sense any longer since container runtime is not Docker anymore. ContainerRuntimeTimeoutError makes more sense now. Refer to this documentation for the complete list of Fargate error messages.

Starting with this new version, Task ENIs support jumbo frames like all other VPC ENIs. AWS says that this will increase the efficiency and reduces compute overhead whenever the network path between source and destination supports jumbo frames.

In this blog post, the updates included with the new platform version 1.4.0 were summarized. Some tests we presented to show how these new updates are utilized.