Microservices Architecture, one of today’s buzzwords in the developer world, is a growing trend not only by small-time companies, but also by high-profile corporations. With the increasing number of users that has Internet access, be it human beings in their mobile devices, robots, self-driving cars and the software they run on, a drastic change in software implementation is needed to adapt for these users’ increasing amounts of data. In the recent years, it became one of the preferred way in developing enterprise applications.

What is Microservices Architecture?

Microservices architecture is a method of developing software like a suite, or in other words, as a collection of small, modular and isolated, and independently-deployable “services”. Each of these “services” , or mini-applications, running in its own process, performs a specific task and communicates through a lightweight mechanism that connects them together and function as one.

It may seem daunting to developers who encounter this for the first time, but let us give them the benefit of the doubt. If you are one of these people, this is the good time to learn about this architecture. 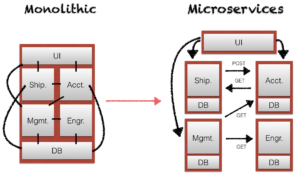 Monolithic vs Microservices architecture on a software. Courtesy of SourceAllies Blog (http://blogs.sourceallies.com/2015/11/microservices-in-practice-the-positive/)

Whereas the Microservice software runs each service on their own process, independent of each other. When something goes wrong with one of the “services” and crash, it will not affect the other services though it may or will affect your application over all. These individual services are independent and can be deployed individually, meaning your application can already start running even though some parts are still missing or is still on the way to be deployed. They can also be stopped and removed at will, without crashing the whole system. 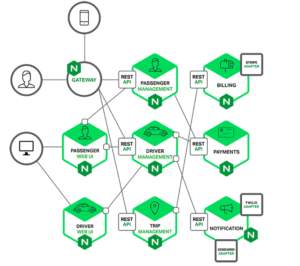 A sample microservices architecture of a car-booking application. Courtesy of NGINX (https://www.nginx.com/blog/nginx-vs-apache-our-view/).